He won an election, extracted the UK from a trading bloc, became hospitalised by a global pandemic and this week he became a parent. It’s been a busy five months for Boris Johnson and unfortunately for him, the hard work is only just beginning.

You may recall Terence Moll’s piece called the ‘The Hammer, the Dance and the End-game’. It is still the case that most countries are in the Hammer phase of dealing with coronavirus. This is when countries lock down quickly and aggressively to contain the spread.

While we should expect these economies to gradually reopen in the next few months, the countries that are dancing most successfully like South Korea and Taiwan have spent years preparing for such an event.

It turns out though, the Hammer is the easy part. The second phase of controlled reopening – the Dance – is where it gets difficult. When do you start dancing? What tempo do you dance at? And can you get everyone off the dancefloor once the music starts?

The Prime Minister is already facing calls from ‘Tory grandees’ and business groups to reopen the economy and ease social distancing measures. But sections of the media and medical bodies say it’s too soon.

Who is right? Open too early, you overwhelm the NHS once more and risk more people dying. Take too long, and more small businesses and households fall through the cracks, worsening poverty and the recession. We’re about to find out if Boris can put ‘DJ’ on his résumé.

It’s not just the UK though. Most leaders in the developed world are facing the same challenge. For guidance, they’ll be looking at countries in East Asia, which are leading the rest of the world into the ‘Dance’ phase.

Lessons from South Korea and Taiwan: It helps to have had a previous outbreak

South Korea is well into the Dance phase. In truth, it never really entered the Hammer. With the exception of its third largest city, Daegu, South Korea has been able to contain the virus without a widespread shutdown. How?

The answer is simple. South Korea suffered an outbreak of Middle East Respiratory Syndrome (MERS) a few years back, and from then on learnt how to deal with pandemics.

So when it became apparent there was an outbreak in Wuhan, the country readied itself immediately and ramped up the production of testing kits. Within weeks of the outbreak Korea, a country of 51 million people, was testing more people per day than any other country - conducting tests within 7 minutes!

And then there’s South Korea’s amazing contact tracing. During an epidemic, the government has the powers to use mobile phone data, credit card data and CCTV to track the population. They can produce timelines of people’s movements to figure out where they have been and who they’ve been in contact with. If you come into contact with someone who has tested positive, the authorities will find you and alert you.

The best example of this is Patient 31. She spread the virus to what would ultimately be over 5,000 people linked to the Shincheonji church — about half of the entire case-load in the country as of today. What’s stunning about her story is not just how many people she infected (and became the most unpopular person in the country), but that the authorities can narrow down the source of thousands of infections to one person. Can you imagine that in the UK?

Taiwan also deserves plaudits. Taiwan’s proximity to China would have put it at the top of everyone’s list for a coronavirus crisis. Instead Taiwan, a country of 23 million people, has had just 400 cases. Four hundred!

Similar to Korea, it had a SARS outbreak in 2003. Its approach has been if anything, even more aggressive. Their contact tracing, and policing of the lockdown goes to unparalleled levels.

Everyone who should be quarantined is monitored using their phone signals, sending an alert to authorities if you leave the house. On Twitter, one individual told a story of how he returned to Taiwan from abroad, so needed to isolate for two weeks at home. At 7.30pm, his mobile phone ran out of battery. By 8.20pm, the police were knocking at his door to find out whether he had broken quarantine. Again, imagine that in the US.

But most countries haven’t had a previous outbreak to learn from.

How has the forthcoming Dance affected the markets?

Equity markets have recovered strongly from their recent lows. Large US stocks are up nearly 30% since the peak of the panic in mid-to-late March. This is probably because investors see a peak in cases in the US, Europe and UK and are optimistic about their forthcoming Dances.

While we should expect these economies to gradually reopen in the next few months, the countries that are dancing most successfully like South Korea and Taiwan have spent years preparing for such an event. This leaves us concerned markets have become too optimistic. We have pared back to neutral relative to our SAA on equities and are not chasing the rally – preferring to look for opportunities in the corporate fixed income markets, which are more attractively priced. 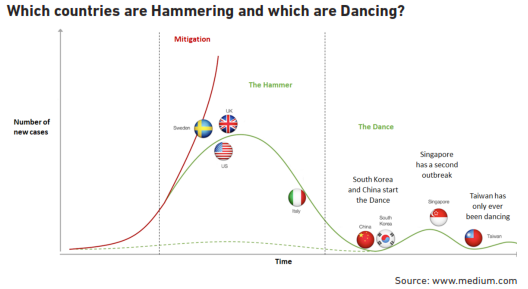