Coronavirus update: Whatever it takes

Hands up who remembers when Greece came clean about its books back in 2010? Do you remember what you were thinking at the time? Was it just Greece? Would the German taxpayer be willing to backstop the European project? Will the euro even exist in a few years’ time?

You probably weren’t thinking that European equities would rally 50% over the three years from their 2011 lows. Or that yields on Irish debt would go negative. You probably didn’t even consider that, fast forward a few years to 2015, the Eurozone economy would grow faster than the US economy. No one did.

This is why following large falls in equities, returns tend to be large and positive as policy makers give investors the comfort to look beyond the next few days.

Instead, most investors were marking down European profit growth as far as the eye could see. Markets were punishing governments like Spain and Italy for the crime of being on the Mediterranean. There was even a competition for the best ideas on how to conduct an orderly break-up of the Eurozone.

It seemed like a dense fog had descended on the future of Europe’s economy. Investors, businesses and consumers needed something, someone, to hold their hands through the dark. In stepped an obscure Italian investment banker from Goldman Sachs, Mario Draghi. He was appointed governor of the European Central Bank (ECB) back in 2011. But it was on 26 July 2012 that he spoke to investors. “The ECB is ready to do whatever it takes to preserve the euro. And believe me, it will be enough” were his immortal words. That marked the high point of the cost of Italian debt- it has come down ever since.

We’re in a similar situation today. Sifting through the market wreckage, we find ourselves asking similar questions. Have governments done enough to deal with the public health crisis? Is there enough support for smaller businesses? Will households and families have enough cash to see them through? What else can central bankers do?

Governments and central bankers have thankfully switched into ‘whatever it takes’ mode. The UK policymakers are certainly doing their bit. State guaranteed loans worth 15% of GDP and direct support for businesses worth £15bn (0.9% of GDP), in addition to the £12bn (0.6% of GDP) announced in the budget. To top it all off, the Bank of England has cut rates, first from 0.75% to 0.25% and now all the way to 0.1% - almost rock bottom.

Will the stimulus be enough? At this stage, nobody knows. But it’s clear that the government and Bank of England are trying to tell us – voters, businesses and investors – that they will do whatever it takes to save the economy. Similar efforts are happening across the world.

In truth, policy makers always switch into ‘whatever it takes’ mode eventually. This is why following large falls in equities, returns tend to be large and positive as policy makers give investors the comfort to look beyond the next few days. The table below shows S&P 500 returns following most large declines since the 1970s. 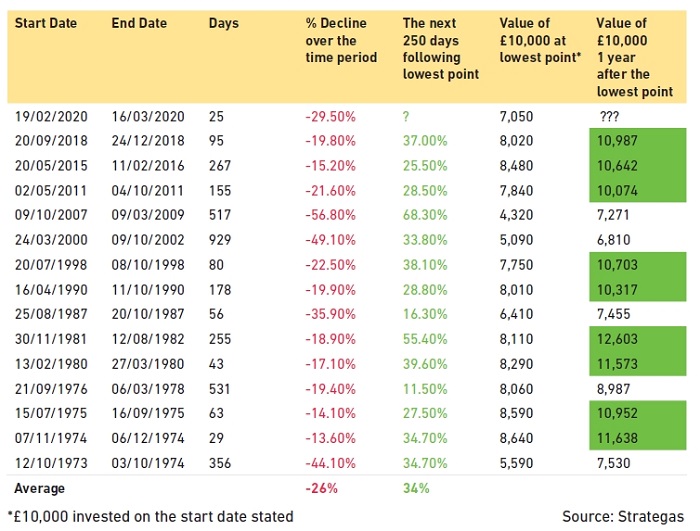 However, this is not a message to jump straight back into equities just yet. Policy is still inadequate in the USA and parts of Europe, and there are still doubts as to whether the current quarantining measures are strong enough. The table also says nothing about whether we have reached the bottom yet. Furthermore, five out of the fourteen periods saw investors remaining underwater during the first year of the recovery. But it is a reminder that markets can and do rise, eventually. So stay invested, stay diversified, stay safe and stay tuned for further updates.