Things are moving fast in the UK. The Bank of England has cut rates to 0.1% this afternoon. The Queen has left the capital. And yesterday, the pound fell to its lowest level against the US Dollar since 1985.

Sterling also fell against the euro and yen. Since the start of the year, as the COVID-19 crisis has picked up steam, sterling has fallen by more than 10% versus all three – shown in the chart below.

That’s the point of diversifying into lots of different assets – you don’t know when individual assets will be helpful, but as long as they have potential they should be included. 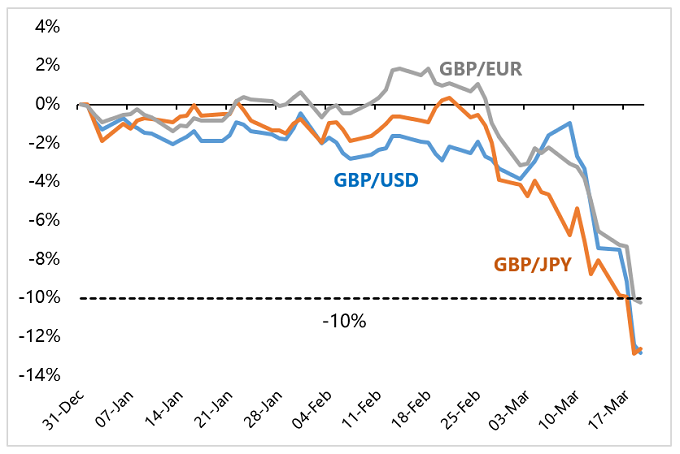 This scale of decline catches the attention of our clients – we’ve had a number of questions already about what this means for the UK, and whether the market is losing faith.

Let’s keep perspective. While sterling has plunged against the big three currencies, it has fared much better versus most other global currencies – like the Korean won, Australian dollar or Brazilian real. In markets like this, it’s probably not the economic outlook that is moving currency markets.

Sitting in the UK, it is always tempting to think that the ‘GBP’ part of the exchange rate is most important. For the rest of the world that’s not necessarily the case. What appears to be a decline in one currency can simply reflect strong gains in another.

We know investors around the world are selling out of almost any assets they own – preferring to hold cash, usually in their own currency. There are more US, Japanese and European investors in the world than there are UK investors, so in a sense the pound is fighting against three large waves of repatriated money.

Currency exposures can often be forgotten or overlooked in portfolios since investors tend to focus on equities and bonds. Our Strategic Asset Allocation makes sure that we have a range of currencies in our portfolios too. Dollars, yen and euros helped portfolios in 2008 and more recently in the Brexit fallout – and are helping again now. That’s the point of diversifying into lots of different assets – you don’t know when individual assets will be helpful, but as long as they have potential they should be included.

Our neutral allocation to non-sterling currencies is around 30% – mostly in dollars, euros and yen. While we can and do make tactical adjustments to these levels, portfolios will always have a significant exposure to foreign currencies.